The direction of the resulting vector is determined using the right-hand rule (assuming a right-handed coordinate system, which we are using).

Note that the cross product is anti-commutative.

The magnitude of the cross product is the area of the parallelogram formed by and .

For a triangle formed by vertices , , and , the normal can be found by computing the vertex for two edges:

We know how to compute a normal for a triangle and we represent our objects as triangle meshes so this should be simple, right? The problem is that we don’t actually upload any information to the gpu on a per-triangle basis. We upload vertices, and then use an index buffer to indicate which vertices are connected to form triangles. And typically each vertex is shared between multiple triangles.

It is possible to upload what we’ll call per-face normals by duplicating each vertex for each triangle it appears in. This is similar to when we rendered something without an index buffer. For some objects, this technique is necessary to get the appearance we want. For example, a cube - each of the six faces of the cube should have a unique normal. So we don’t want to share vertices on the corners of the cube. 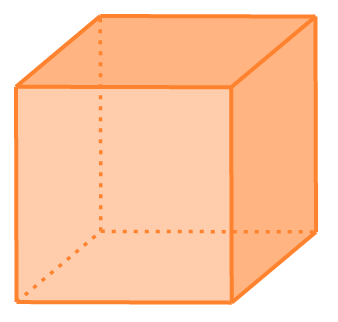 But typically we actually want to compute a unique normal vertex, called per-vertex normals. We do this by finding every triangle that a vertex is a part of and averaging all their normals. This is what you would commonly do to represent the normals of say, a sphere.

Note that for a mesh that contains both hard edges (like a cube) and smooth edges (like a sphere), it can be difficult to compute normals by any automatic process. We often rely on the artist and/or the modeling software to provide normals for our meshes and load them in from whatever mesh file format we are using.

A lot of reflectance equations involve the dot product between two vectors:

When implementing this in GLSL, you should first make sure to normalize all vectors that are used in such a way. For illimunation, we would very rarely if ever want to use a vector of other-than unit length.

Note that even if you normalize something in a vertex shader, you must re-normalize in the fragment shader. The interpolation of three normalized vectors is not necessarily normalized.

When computing the dot product, you also want to make sure you don’t allow negative numbers.

There is no such thing as negative light, so we must avoid allowing negative numbers into these computations. Again, this is the case is all or nearly all computations for illumination - we’ll note it carefully if there is an exception.

Since we know that and are normalized, the dot product will not be greater than 1. Even so, for readability and absolute certainty (e.g. to make bugs more noticeable and predictable if we fail to normalize all the vectors), it’s a good idea to clamp the value between and .

This is mathematically equivalent to:

But it’s far more readable to use the clamp function.

The normal matrix is constructed by taking the inverse transpose (tranpose of the inverse) of the model matrix:

Note that by definition, the inverse-tranpose of any invertable matrix is the same as the tranpose-inverse, so we can effectively do this instead:

Just in case you were curious.

If you’re curious why the inverse transpose accomplishes what it does, it can be explained somewhat vaguely by noting that:

So the inverse-transpose of a matrix containing scale and rotation transformations will contain the original rotation but the inverted scale.

There are three different shading models we can choose from. This is entirely separate from the reflection models we have already discussed. It instead has to do with how and when the shading computation is performed, not the equations used for that computation.

In flat shading, we perform the shading computation once per face. This is not strictly possible in OpenGL, but we can mimic the result by specifying a single normal per face. I.e. this is what you’ll get if you use per-face normals.

In Phong shading (confusingly different and separate from the Phong reflection model), we perform the shading computation once per pixel. You must also have per-vertex normals for this. Simply compute the shading result in the fragment shading, using normals and vectors provided by the vertex shader and interpolated.