Object space: the coordinates stored in the mesh file, uploaded to the VBO, and sent to vertex shader as in vec3 vPosition

The Z values of coordinates in NDC are from -1.0 to 1.0 and this will map to depth values. Similarly, Z values in clip coordinates will be in the range -w to w. 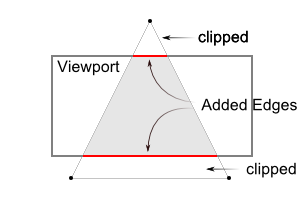 If a triangle is partially outside the view volume, it will be reconstructed such that no part is outside of the view volume. This may involve creating additional triangles.

Further information can be found here.

Culling refers to the process of removing objects from the graphics pipeline at some early stage, to avoid further computation on something which will inevitably not be visible. In this respect it is similar to clipping, but generally the term means any approach other than the standard clipping algorithm that is part of the graphics pipeline.

One form of culling is backface culling. This is useful when some watertight mesh will only be visible from the outside (as is often the case in many graphics applications). In this case, any face which is pointing away from the camera will not be visible. Such faces can be removed by checking the “winding order” of all triangles.

By default, OpenGL expects counter-clockwise winding order for triangles that are facing forwards. With backface culling enabled, triangles facing the other direction will be automatically culled. This occurs before rasterization.

Further information can be found here.

There are other techniques that can be used to cull objects at various stages in the pipeline. They will be covered more extensively in CSC 476.

There’s a couple of important things to note about the projection transform. It is constructed using a “near” and “far” value and . For mathematic reasons, we can’t use for the near value, or nothing will be visible. We’re also limited in general for our choices of these values. We can’t set near too close, or set far too distant, or else the precision of the depth buffer will be compromised.

An effect called z-fighting is produced when the near and far values are set in such a way that the precision of the depth buffer is unsufficient to represent fragment depths appropriately. Numerical imprecision issues prevents the depth test from working in a consistent or expected manner, and objects will appear to bleed through other objects in a shimmering/noisy manner.

A more in-depth (har har) explanation can be found here.

With the image sensor on the plane: